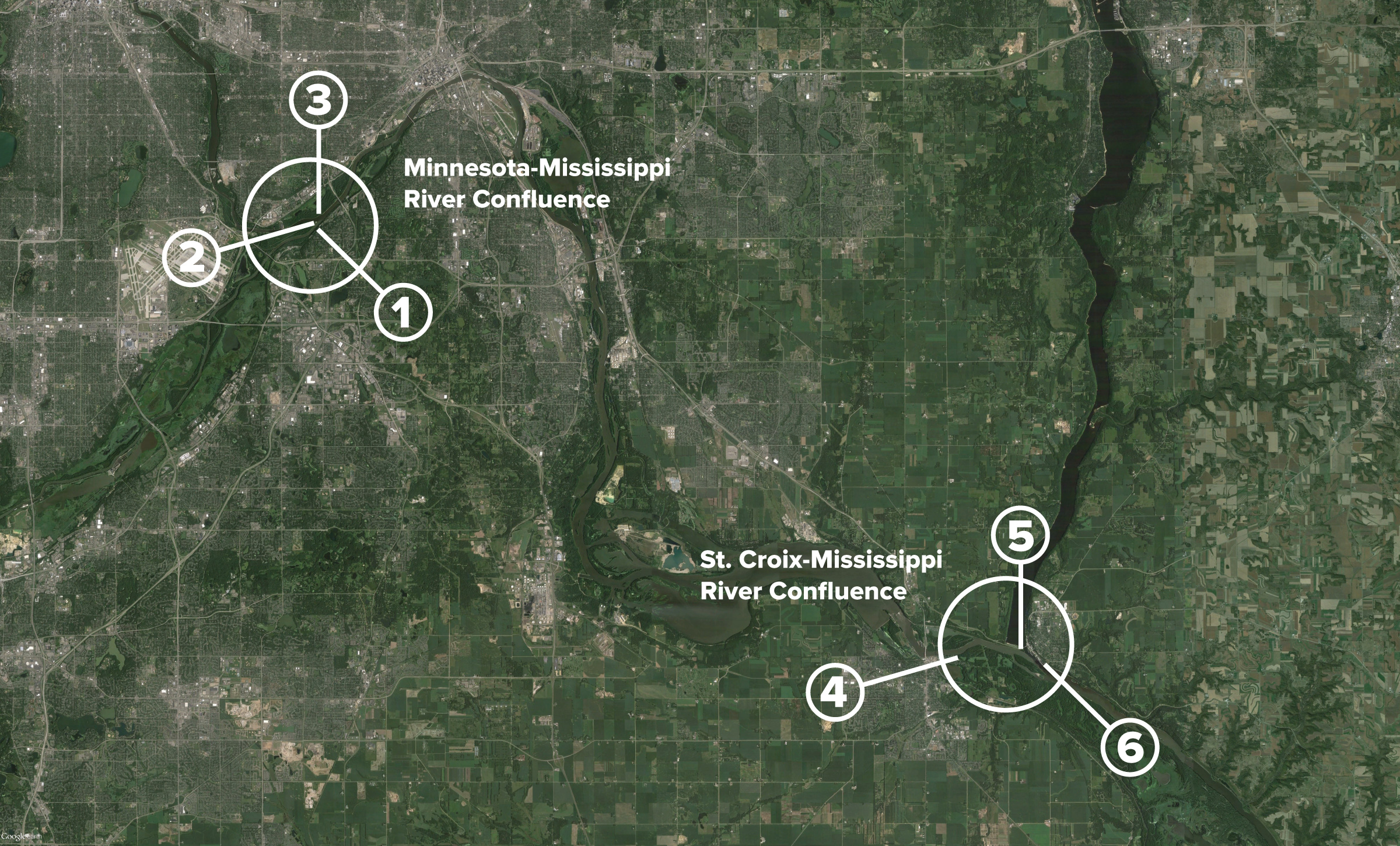 At one point on the afternoon of September 5, 2015, all six performers danced in unison at precisely the same moment, using dance to connect with each other over distance.

This site is the furthest upriver. The beach is on the Minnesota River, immediately before it forms the tip of Pike Island and joins the Mississippi River. The railroad lines runs along the river bank. Note the colors of the two rivers flowing from left to right in the photo: the “coffee” colored Mississippi on the top meets the “chocolate milk” colored Minnesota River coming in from the bottom. 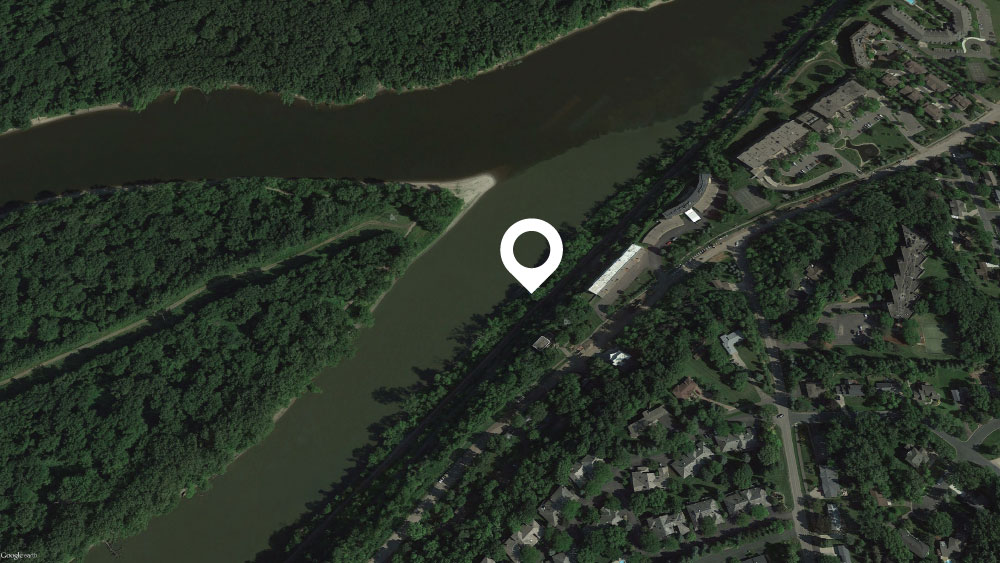 Laura Levinson is a dancer and early childhood arts educator based in Minneapolis. She graduated from Macalester College in 2014 with a BA in sociology, where her thesis examined the intersections of race and gender in online portrayals of the dancing body. Laura continues to pursue her strong interest in healing work – particularly trauma-centered healing and anti-racism – through embodied practice. She will receive her Registered Yoga Teacher certification in December of 2015, and is currently exploring ways of addressing and dismantling white supremacy/racism through mindfulness and movement.

At the very tip of Pike Island there is a beautiful sandy point formed by the confluence of the Mississippi River and the Minnesota River. This is where the six dancers performed together before heading out to their own separate spots. The solo dancer in this location is Kaori Kenmotsu. 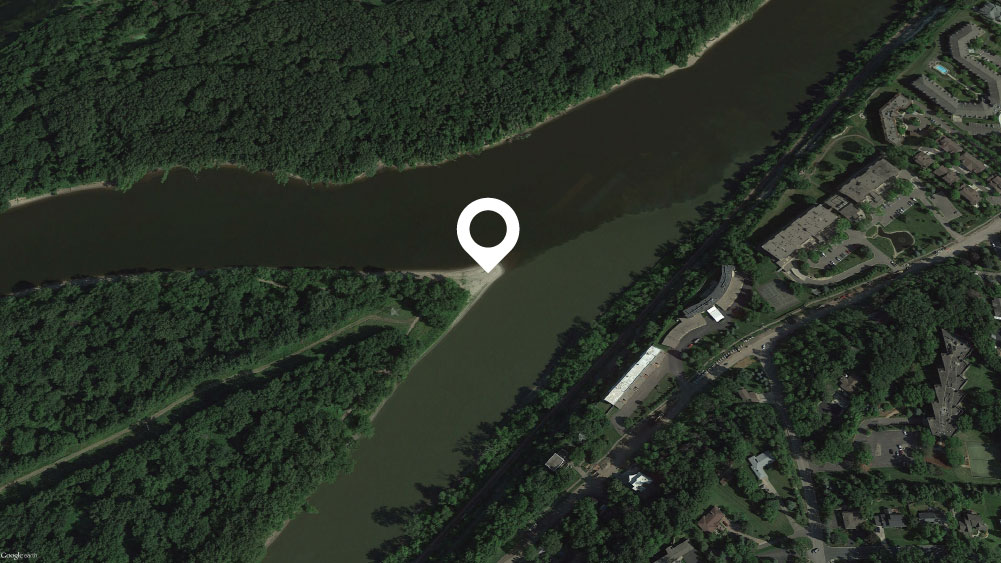 Kaori Kenmotsu is a Senior Lecturer at Hamline University and the Artistic Director for the Hamline Dance Ensemble. From 2007 – 2013 she was a company member of Carl Flink’s Black Label Movement and is currently a member of TimeTrack Productions. She received her MFA in dance at the University of Wisconsin. Her choreography has been seen on stage at the Anne Simley Theater, E.M. Pearson Theater, Barbara Barker Center for Dance, Red Eye Collaborative, Patrick’s Cabaret, Intermedia Arts and at various universities through the American College Dance Association. She has worked with Mu Performing Arts, 10,000 Dances Dance Company, Pangea World Theater and Gomez Dance as well as with several local and national choreographers. She would like to thank Marylee for a wonderful experience working on this film project!

On the east side of the Mississippi River, just downriver of the where the Minnesota River comes in from parts west, sandy beaches afford wide river vistas. 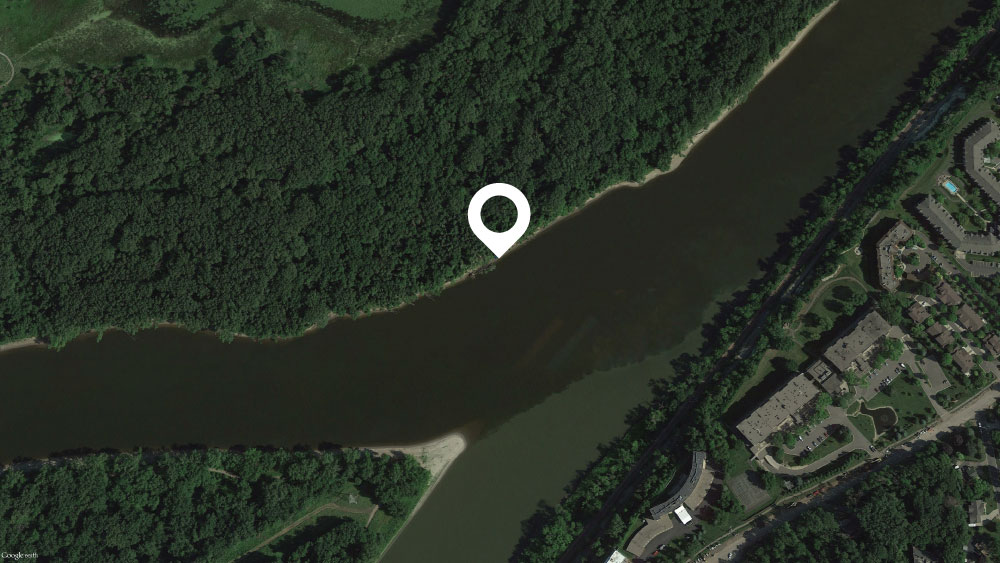 On the west side of the Mississippi River, just shy of the St. Croix confluence, is a beautiful tip of land at the site of the Hastings Marina. 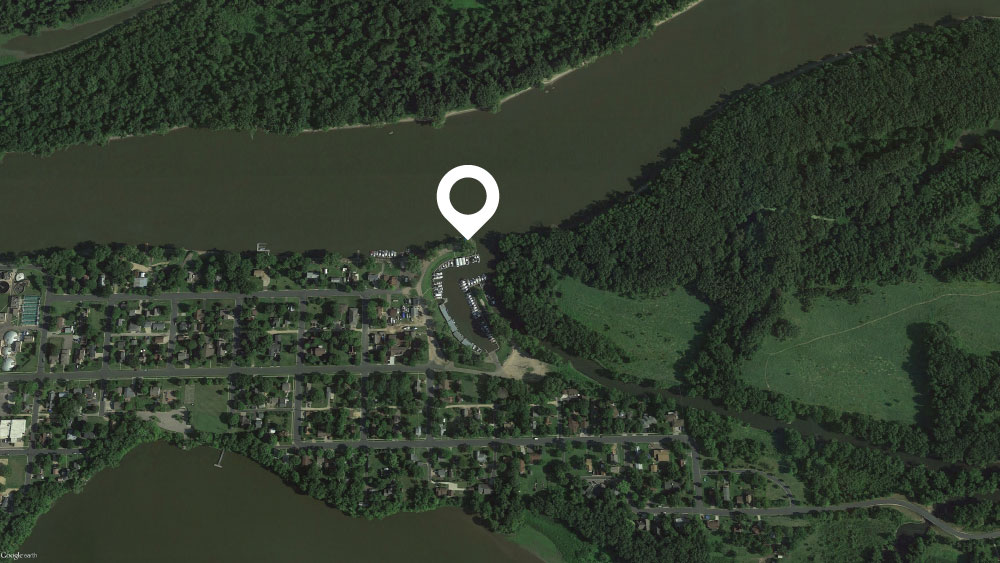 Alys Ayumi Ogura started modern-ballet lessons as a child under the guidance of Mika Kurosawa, who later became to known as the “godmother” of Japanese contemporary dance. While in college, Ayumi was chosen to perform a duet with John Beasant III for the American College Dance Festival Association’s central-district gala concert. She was also recognized for being the most outstanding student of the Theater and Dance Department in her graduating year. Ayumi has been performing in the Twin Cities since 2010, and has worked with the BodyCartography Project, Company Blu (Italy) and Sandrine Harris (CT) through Link Vostok. She also has worked with Emily Johnson & Catalyst Dance, Hauser Dance, Kinetic Evolutions Dance Company, MotionArt, Emily Gastineau, Marylee Hardenbergh, Lori Mercil, Una Setia, and Vanessa Voskuil, among others.  Over the past two years, her dancing highlights include performing with the AXIS Dance Company (CA) at the Ordway Center, and with Josie Winship in “True Confession of The Queen” at Patrick’s Cabaret. Her own choreographies have been performed as a part of Anything But English: A Multilingual Cabaret at Patrick’s Cabaret, and at the Ragamala Dance Company’s Ode to Navarathri Kolu Festival at Landmark Center.  Her upcoming projects include Elsie Myers Martin’s new work, “Heart, Not So Heavy As Mine,” based on Emily Dickinson’s poem, which will premier with music composed by Janika Vanervelde for the full choir and organ at the Plymouth Congressional Church in February 2016, and the Kinetic Evolutions Dance Company’s 10th Anniversary show at The Tek Box in June 2016.  Ayumi would like to extend her sincere thanks to these special mentors: Mika Kurosawa, Rob Scoggins, Heidi Jasmin, and Sarah LaRose-Holland.

On the west side of the St. Croix River, just before the mouth opens into the Mississippi River,  Point Douglas Park has magnificent views of the St. Croix. This Washington County park stretches along the wide basin adjacent to the bridge that crosses between Minnesota and Wisconsin, and lies just north of the Burlington northern tracks. 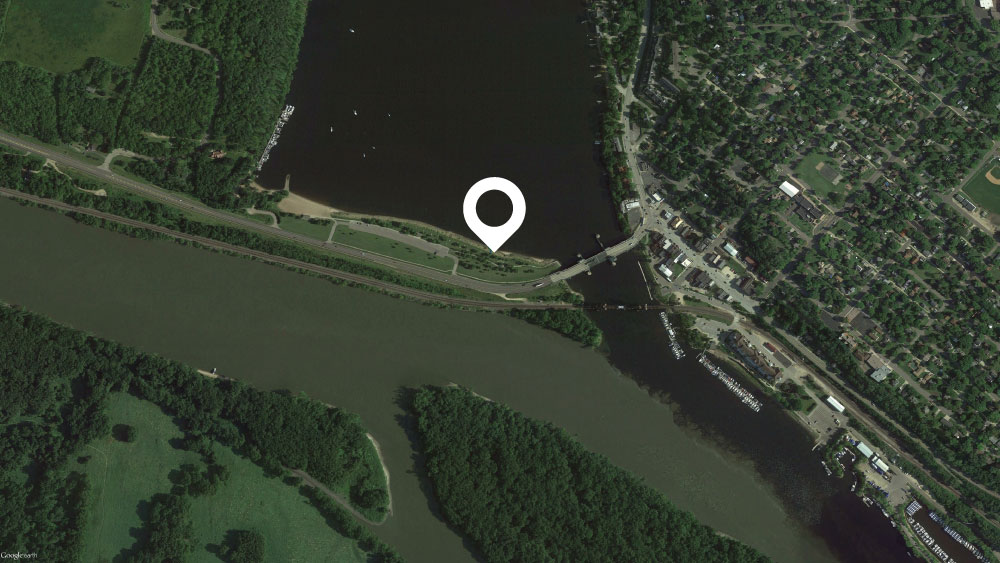 Whitney McClusky began her study of African dance at The Djoniba Dance and Drum Center New York where she studied with Master dancers from West Africa including members of “Les Mervielles de Guinea” and “Les Ballets Africains”. Since then she has had the opportunity to travel to Senegal and Guinea to deepen her knowledge of West African Dance. In 2009 she established “Duniya Drum & Dance” a local performance group and organization in support of African drum and dance in the Twin Cities.  Currently she serves as Director of Duniya and teaches at SPCPA High School, Carleton College and FAIR Middle School.

On the east side of the Mississippi River, just downriver from the confluence of the St. Croix River, is a beautiful peninsula where our southernmost, down-riverest dancer performed. 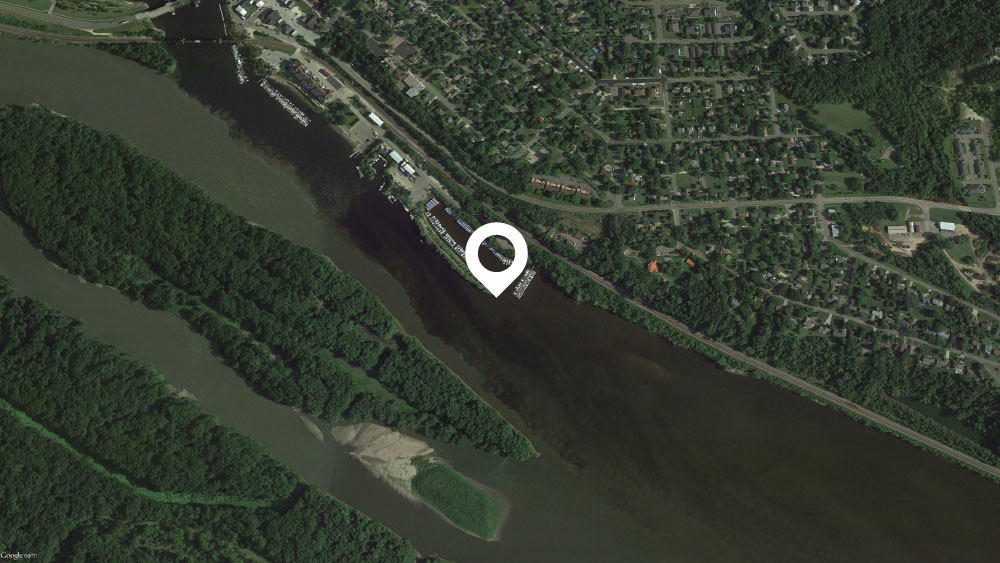 After majoring in Modern Dance and Voice at Carleton, Lindalee joined Dance Studio Margret Dietz and Choreogram Dance Company in the early 1970s. From there she formed Syntaxis of the Dance and MDSN, MN Dance Support Network. Having studied with Cathy Ward, Erik Hawkins, Bill T Jones, Helmut Gottschild, and taught in Washington DC, Chicago and the Twin Cities, she has crafted a practice in dance/movement as a human service, working in churches, prisons, womens’ shelters, mens’ treatment centers and with absolute beginners from 2 to 82. Besides being a licensed Hennepin County therapeutic daycare, foster care and adoption professional, she is also a Master of Human Development (St. Mary’s) and a MN licensed practical nurse with health unit coordinator’s certificate (SE Technical). In 2010 she coauthored the memoir “Margret Dietz – A Dancer’s Legacy” and in 2013 helped organize the Margret Dietz Centenary at The Benedicta Arts Center. She has appeared in a solo as the Webweaver in ‘Dark Dances’ by Marie Winckler, in the hive of ‘Now Machine’ by Emily Gastineau, and with Marylee Hardenbergh dedicating the Weisman Museum, at a Bastille Day parade and in a dance therapy course film at Metro State. Linda is currently an itinerant nanny, enjoys being in the MN dance posse, (i.e. audience), and devotes her research to Dance History in the German Expressionist schools. Two of her most recent hobbies are singing with the Bethlehem Lutheran Choir and volunteering with both Tapestry and Home Line who advocate for the poor in MN’s Affordable Housing Movement.